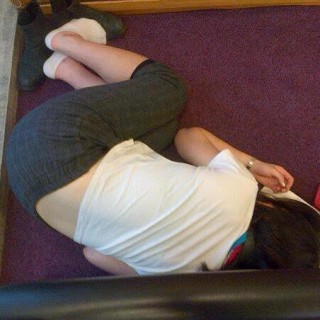 Emptiness is scarier than sorrow
Some other love I may have to borrow
Until then, I wander to and fro
I might feel better tomorrow.

I spend the day on Middle Meadow Walk
Attempting to slip pamphlets to willing fingertips,
Have people stop for the words from my lips
Disguising corporate advertisement

There’s hundreds of us like this,
Catching a spare moment of time from unsuspecting tourists
Hoping to God that they’ll take the time to listen
And not just pass us by like wind

As much as I feel resilience
After rude stares saying
“I want nothing more than for you to leave me alone”
For every kind stranger who smiles back
It’s like a kiss on the cheek
It is wondrous.
It is magical.
It is simply…bliss.

This slip of paper gives me permission to disrupt conversations
Stumble upon lives I would’ve never thought to
And all I’ve really learned from these experiences is-
There are kind people all around you.

In the eyes of a flyerer
Every person is a passenger who flies through us
Deciding whether to be influenced by interaction
Cut out the factor of attraction
Whatever happens, it’s a kind of distraction
The kind we look for in entertainment

Although my feet have turned to jelly
And my back is screaming curse words at me
The rate of wage still quite depressing
I march on, rather silly-nilly-ly

Trying hard to make sure people go to good shows
Supporting performance, watching love for art glow
None of that really matters though,
Because at the end of the day,
My love for people continues to grow.

They say that the timing isn’t right.
They say that “I wish I met you earlier,”
That maybe if we had met sooner, then things would be different.
That I wouldn’t feel reminiscent of moments of realistic fiction.

That first “pint” we had was like a ticking clock,
I don’t drink often but I ordered a rum and cola,
Hoping to soothe the drumbeats in my chest
To liquor up the butterflies in my gut
The second that I requested alcohol
That wasn’t intended for a drunken night,
I knew that I liked you.
But that love could never have grew into what I wanted it to.

Call me a fool for growing attached to people who continue to leave
Hey, I guess I’m leaving too,
The lack of commitment is a given when the timer’s ticking
Only proving true that nothing could come of this.
Nothing can result from this kiss except for the realisation of sexual tension I wouldn’t really like to admit,
But how can I deny that every moment intimate is only fuel to grow resistant to reasons to stay away from this.
How can I do anything but be persistent in finding a lost cause-
I clench my fist,
Wanting to punch the clock for the “bad timing.”

It’s not for the lack of trying
I’ve tried to not be dazzled by new people,
Experiences,
Aspiring to novel places and better souls that must exist in this realm
Yet having you here in my arms,
In my presence
Stroking your long hair, effervescent
Is like an early Christmas present that I opened too early
And the gift is being punished by distance.

Or rather,
Circumstance.
Nobody thinks about the future when they’re out dancing,
Passing motions glance like atoms sifting through each other
And once they hit, chemistry only makes the reaction greater.
I’ll think about what’s to come later-
Because it’ll only ruin the night.

I suppose this is what it’s like to be Cinderella
Fleeting fancies prance around magical in temporary bliss
Missing the fact that they aren’t real in a plane of consistency.
Whether it’s when the clock strikes 12, or when the calendar strikes off another month
The season of misty eyed memories perishes with it
An endless list of tasks to tend when this to-do list disintegrates.

Sigh…
I grow continually confused.
Is the bad timing what attracted me to you?
When expiration dates come too close
There’s an urgency to compromise
Despite not genuinely wanting to.

I actually have no clue
Of who I like, and what to do.

I guess I just wanted intimacy.
But I look too much at my watch to allow myself the courtesy to enjoy it.
Time passes so fucking fast when there’s a limit to what you can or cannot accomplish, be paid a gentle visit from the constant reminder of a “deadline”-
A blatant sign that these feelings will die with time as well.

It wasn’t meant to be, probably.
It wasn’t there, truly
It takes time to get to know people properly
To gain in my affections a monopoly
A wealth of private attention that hardly ever gets reciprocated.
So why would it start now?

The time isn’t right for us. There is no us to begin with anyways.
So as we part ways eventually, I’ll imagine every footstep as a measurement to gauge the accumulating detachment that I must feel.
Cut that string that I hoped we made a connection on.

And move on, like the minutes of the hands of time will forever strike upon.
Forget the details of your life, the interests that we shared, the philosophies which we cared for and what challenges we dared to attack.

I’ll move right back on track to the silence in the gaps where ticks used to be.
And I’ll have a nice cup of tea wondering what life could be…

If the timing was right.

Like a lollipop stuck on your shirt
Or sugar spilt on your trousers
Molasses caressing,
Your clothing stained
On the cress of the cuff, corn chowder,

I’m sweet on you like sweet sweet honey
Like trickled cheeky honey-sticks
Around the wicked candle wick
Which burns for you,
Diffusing slowly onto you

And though the dew could not remain runny
And though these days refuse to stay sunny
I’m still sweet on you
Like thick thick honey,

Which one day I’ll find funny.

Which is which?
The door knob turns
The water’s hot- Mugs now, quickly!

Your eyes are rich
Your love I yearn,
But let’s just have a cup of tea.

Pour all your heart out
Like a teapot, short and stout
Here is my handle, here is my spout
Hear me shout

Thanks again, You
I hope you remember through and through
That someone else out there
Is thankful for you too.

Wipe the fuzz off your glances and peer through reality glasses
Through the massive amount of distraction it’s hard to find anything anyways
So focus and look carefully
Or you might miss it
Again and again,
Before it’s too late.

Before things start changing at alarming rates,
Before the delay makes the gapping gap great.
Before fate decides that it’s not enough to just tolerate a blind search that’s precarious
Waiting along the side for your attention to finally zoom into clarity
By the time you care and even notice something’s amiss
A wasted wish
And a shooting star disappears into the distance
Kissing your existence goodbye and separated.
When it was there all along.

Take the chance and grab it.
Walk on the pavement fast and grasp the night as it passes.
Look at your surroundings and smile at what you think is funny
Spend less money-
Find odd solutions to problems
Rule of thumb is to live life spontaneously and never for granted
It’s an access to live life
And living life’s an honour…

We want what we can’t have
And that fact’s a law since
It’s always proven true
That the new makes us “awe”
And the old does now too.

But relax, and live in the present,
And since opposites attract
And you’re meant to be the way you are
What you want will find you back
The way night finds blackness
Then back to sunrise again.

Don’t be a phantom of a human being
Believing that there’s nothing more to life that what you’ve been doing.
Or already have done
No problem too big or too much to handle,
With family and friends you’ll be alright with a helping hand
All you need to do is look closely and listen,
Love and life is all around you,
Let it embrace you and take you
Make you grateful and never wasteful
Seize the sight and close your eyes…
Maybe you can finally see it in focus,
Making you wonder:

“Where have I been?”

My comfort’s paralysed
Terrified.
Petrified-
Am I very obviously mystified?
Am I the only one feeling these currents, these vibes
Tumbling nervously on the inside by your side?

Yet you walk on casually
Walk forth
Walk back
Not knowing at all that I feel attacked
Your glow and your beauty
Enraptured and captured
Kidnapped I am haggard
And staggered by you.

“Hey it was nice to meet you. I’ll definitely see you soon!”

I’m enjoying too much being struck by lightening
Struck by your gaze
The sparks make me blush
And my heart’s in a blaze
I do not often love pain in this way
But it was indeed
A pleasure,
To meet you today.

When you are old by W.B. Yeats